The origins of the buffalo

The area of origin of the buffalo has been identified in central India, where it would have been domesticated already in the Palaeolithic age (Santijanni, 1910). Ferrara (1960) reports depictions of 5000 B.C. that would allow to suppose that in that period the buffalo was domesticated. In some caves of central India have been found wall paintings dating back to 3800 B.C. depicting scenes of domestic life in which buffaloes are present. Fossil finds in Ur, Mesopotamia, would testify the presence of domestic buffaloes dating back to the third millennium BC.

The buffalo in Italy
From the existing documentation it is not possible to deduce the exact period in which the buffalo appeared in Italy. Balestrieri (1974) supports the autochthonous origin of the Italian buffalo based on the discovery of fossils in Lazio and the Tuscan archipelago dating back to the Quaternary and Lower Pleistocene.
Campanile Castaldo (1960), reports that confirmation of the presence of the species in Roman age is provided by the discovery of a sculpture, that represents a buffalo head, in the ruins of the villa of Adriano to Tivoli. Even if the doubt could arise that such sculpture could have been brought to Rome from Egypt or from some other country, it seems licit to affirm that if it has been placed in a house of the Emperor, the Romans must have certainly direct knowledge of it.
According to Cantaluppo (1960), instead, there is no evidence of the existence of the buffalo in Italy in Roman times; in fact, the major Latin writers of agriculture, such as Cato, Varro, Virgil, Colummella, do not make any reference to it.

The buffalo in southern Italy 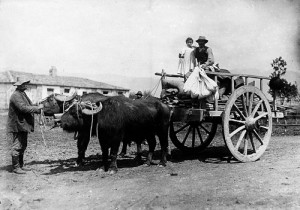 A very credited hypothesis is that of the introduction of the buffalo in Italy, from Hungary, by the Lombards at the end of the sixth century, with the barbarian invasions.
Paolo Diacono, in the IV book of his Historia Longobardum, wrote that wild horses and buffaloes were brought to Italy for the first time. Following these conquerors the buffaloes migrated to the south (Longobardia minor), to the plains of Caserta and Salerno (Duchy of Benevento), where they were present for another five centuries.
Other authors speak of a second introduction of the buffalo by the Saracens from Egypt at the time of the Arab conquests of the 8th century, although it seems unlikely that they transported them by sea to Italy on their light boats (Correale, Citro, 1995).

The first official testimonies of the presence of the buffalo in Italy are dated from 1200. Many of these come from the administrative records of the archives of the Benedictines, a religious order very present in the Salerno area during the medieval period.
According to Giardiello (1992), from 300 onwards there are more and more references to the buffalo in the chronicles. These are often short quotations, but they are enough to testify the presence of this animal in the agricultural economy of some areas of southern Italy.
In the documents found in Casertano, the buffalo appears in 1496 in the hereditary axis of Rinaldo Fieramosca, parent of the famous Ettore, who included some estates with buffalo farms in the surroundings of Capua (Campanile, Castaldo, 1958).

Giardiello points out that, in 700, the buffalo began to be mentioned also in literature and in particular in the “travel diaries” of tourists who came to Italy to admire the historical-natural beauty of our country.
In this socio-economic context, characterized by large estates and feudal estates, by marshy land typical of the Tuscan-Latin Maremma, the Pontine plains and in particular the plains between the Garigliano and Volturno and that of the Sele, buffalo breeding was the only resource, the only sustainable agricultural activity in those unhealthy lands.
The buffalo, has populated these abandoned plains, feeding almost exclusively on herbs and shrubs not appetizing to other ruminants, immersing itself in the hottest hours of the day of the summer in the waters 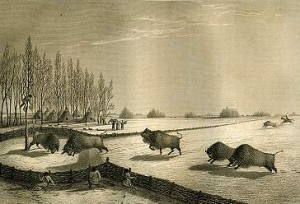 of rivers and, in the absence of these, in the mud of marshes and large pits called tonzi or caramoni that dug until it reached the first water table (de Franciscis, 1992).

The buffalo was used in the ploughing of fields destined to extensive cereal cultivation and the castrated males (sweaters) proved useful for intercompany transport, especially in marshy soils where the buffalo’s hooves, long and wide, did not sink too much (Perillo, 1975).

This website uses cookies to improve your experience while you navigate through the website. Out of these, the cookies that are categorized as necessary are stored on your browser as they are essential for the working of basic functionalities of the website. We also use third-party cookies that help us analyze and understand how you use this website. These cookies will be stored in your browser only with your consent. You also have the option to opt-out of these cookies. But opting out of some of these cookies may affect your browsing experience.
Necessary Always Enabled

Any cookies that may not be particularly necessary for the website to function and is used specifically to collect user personal data via analytics, ads, other embedded contents are termed as non-necessary cookies. It is mandatory to procure user consent prior to running these cookies on your website.